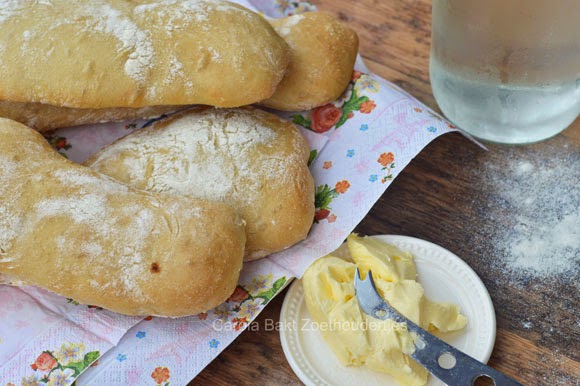 You can make Ciabatta yourself! From the book Bakken met Paul Hollywood comes this delicious recipe for ciabatta. Article from the website Carola Bakt Zoethoudertjes. One of my favourite breads. Of course also because it comes from Italy, one of my favourite holiday countries. How do you bake ciabatta bread?

Tip from Paul Hollywood: In The Great British Bake Off, Paul had the candidates bake this recipe and gave them one tip: patience. Don’t let the dough rise too quickly, for example by heating it up. Grease a square plastic container with a capacity of about 2-3 litres. It is important that the dough is square. I happen to have square moulds but if I did not have these, I would use the brownie mould. By the way, I find it more convenient to put baking paper in the mould like this.

This way, you can easily remove the dough from the mould. Normally with bread this is not a problem, but ciabatta is a special, wet dough. This way, you don’t have to touch the dough. In my case, the dough did not come out of the mould evenly. But it doesn’t affect the taste 🙂

Put the flour, yeast in a mixer with a dough hook. Add the oil and three quarters of the water and mix on low speed. When everything is already well mixed I personally only add the salt to make sure that the yeast is already working and spreading through the dough. Now slowly add the remaining water. So the dough has 100 ml. more water than a normal bread.

Place the dough in the square pan. Cover it with a tea towel or if it is cold I always use a plastic bag to keep the heat in and the draught out. Leave it until the dough has risen 2-3 times. This can take 1-2 hours.

The dough is very wet, thin and elastic, and is difficult to remove from the mould. That is why I think that from now on I will either use a flexible brownie mould that I can loosen without touching the dough, or use baking paper to get the dough out of the mould.
Sprinkle the work surface with flour and semolina. The dough is very wet but try to keep the square shape. Handle the dough as little as possible so that it does not lose air. Sprinkle some more flour and semolina over the dough and cut it into four pieces. First cut it in half, then cut the halves in half again (makes four long loaves).

Stretch the loaves slightly and place them on the baking tray. That sounds easier than it is, because the dough is so thin, wet and stubborn. Fortunately, an authentic rustic ciabatta is not evenly shaped but nice and nonchalant.
Let the ciabatta rest for another 10 minutes and then bake them for 25 minutes until golden brown. They will sound hollow inside when you tap on the bottom.
Leave the loaves to cool on a wire rack. Bon appetit 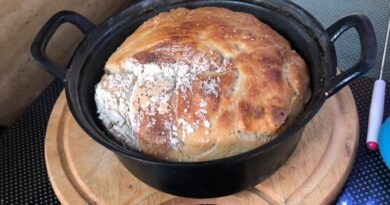 Baking bread is a piece of cake