As mentioned in the earlier blog, we, the Asmara and the Ellya, left the lock at Holtenau on Monday 11-July-2022. The sails are set, the wind is favourable to the North but very weak. This also has its advantage, the sea is calm. At the exit of the Kieler Fjord the Ellya goes port side in the direction of Maasholm, so here our paths separate for the time being, because the Asmara goes in a straight line northwards in the direction of the Aero Island.

Once I had set sail for Aero, I took down the Genoa again, as the wind was now completely subsiding. I sail to the island, which I have visited several times and which has stolen my heart, via the southern point of the island at Marstal. That is the southernmost point of the island. The expected arrival for the Marstal approach is at around 18.00. But we won’t be there yet. All the water there is very shallow, sometimes as little as 30 cm, so we have to follow the channels. At first, the approach to Marstal runs close to the harbour and the city front, and then continues eastwards with a right-angled bend. Halfway through the channel, I have to turn to port in the direction of the centre of the island. Here the clear buoyage ends and the water becomes shallower. My chart, which is now more than two years old, shows a small channel, without buoys, to a green buoy four miles away. The water in this gully, according to my chart, would be 2-3 metres deep, but I put 1.25 metres. I have sailed across it before, but you will understand that I will not go through at full speed. So at half speed I sail carefully towards the green barrel. I eventually reach it, after which the route becomes easier to follow and I finally drop anchor in Aeroskobing bay at 20.30, as planned.

Now you may wonder why I didn’t buy new charts, well each chart for my Raymarine plotter costs €350 and you can update them “for free” for one year. If you want a new update after that you pay 50%, so €175,- for another year. Knowing that I have about 12 charts of the entire Baltic Sea, you will understand that this is a costly affair. On the whole Baltic Sea there are hardly any tides (max 20-30cm), which means that not much has changed in those areas. A harbour may have been added or perhaps disappeared, but that does not interest me. Of course, last year I think I came across areas where there was concrete marking at low tide which is no longer there. Well then, you have to use your common sense and calmly look for alternatives. In the old days, they did not have GPS and concrete maps either. Only in areas with many tides, such as the Dutch and German mud flats and many other areas, I would certainly not sail there without a current map.
An example, which perhaps many sailors know. The approach at Norderney (the German Wadden) there you run into the Dovetief buoy and then through a concrete marking system. For example, I sailed out there in May 2015 (with an updated map from April) from the harbour according to the buoy line, when I was back there on the return trip 3 months later with bad weather and nasty waves, it turned out that I could not find the buoys. And that despite the track line on my plotter, the buoys were no longer there according to my map, despite the intermediate update I did. I had to search on a rolling ship to find the Dovetief again and the buoy line inside. Because of the waves, those buoys are hardly to be found, only with the help of my radar I found them and could walk in safely.
The moral: Especially in tidal areas, never sail blindly on your digital or updated paper chart. The updates are often 3-6 months behind the reality. When you arrive at a buoy, check that the number matches your chart and then the whole line of buoys. Check the numbers of the buoys! Use your common sense!

Let me give you another example of a beautiful tool of our modern technology when using electronic plotters. Every plotter has the option of switching a track line on or off. Switch these on at the beginning of your voyage. (You can remove them again with a click at the end) You will then leave a trace, your track, in usually a black line. Now you know the story of Tom Thumb, who threw breadcrumbs where he had walked and found his way back. But beware, this can only be done safely in the short term, see above about Dovetief aanloop. I give another example from my own experience in 2015, the year I sailed to St.Petersburg. a round Baltic against the clock, in 6 months. My goal and destination for that year was St.Petersburg, Russia. Clearing out and later clearing in again on the island of Haapasaari, Finland. An island in an archipelago with many cardinal buoys. Cleared out on 14-7-2015 at custom and immigration in Finland, the island of Haapaasari, for a trip of 80 Nm, I left at 03.00 to St.Petersburg. I arrived on schedule on 14-7-2015 at 23.30 in St. Petersburg. Departure was again scheduled for 17-7-2015. No bad weather forecast so who cares. I now quote a snippet from my 2015 report: “Departed at 10.45. Wind WNW 3 visibility > 10 km. Most of the route I have the wind against me. So no sailing.
Expected arrival at Haapasaari 02.30. A beautiful day with little wind and waves.”. . . . . “At 22.30 the wind has picked up to 7 Bft with gusts to 8-9. I have it right against me, the waves are getting high and uncomfortable.
So now, with these conditions, I will have to make the approach between the channels and the islands of Haapasaari. I sign off with the Russians at the border crossing.”. . . . “The night is black and looking outside is no use at all, I switch on my deck lights front and back to be seen better. With a heavily zoomed-in chart, I now sail blind over my outgoing track at a reduced speed of 3 kts. I can already see the lights of the coastguard wharf, but still have to go through several channels and around beacons with shallows. “Read the entire article on Baltic 2015 Part 4 Finland- St.Petersburg”
The moral the technique can also give you a hand, little thumb had not calculated that birds picked up his breadcrumbs. Fortunately, this did not affect me.

After anchoring for a week and visiting the island many times (see YouTube video #7), I decide to see where Sam and Cees from the Ellya are. It turns out that they have also ascended a bit higher, along the Danish east coast. Their goal is to sail north along the East Coast of Denmark and then head east to return via Copenhagen. As the crow flies, they are a little higher up the line than I am. I decided to also sail to Middelfart to have a last rendezvous with Sam and Cees’s Ellya. I was last there in 2013.

I contact them about their intentions, well they are indeed going on to Middelfart. So I suggest to have a rendezvous on the leeward side of the island of Helnaes. After some discussion it appears that they can be there on 18-July-2022 around 15.00 and so can I. When I get close to the island of Helnaes, I see them sailing just before me through the passage to the anchorage. 10 minutes later I arrive at that place too. They had some problems with seaweed on the bottom and asked me to throw out my anchor anyway. After some manoeuvring, I manage to bring the Asmara to the Ellya behind my anchor. A throw line helps and we are both anchored against each other in 2 metres of water.

We enjoyed the spot we were in, there was hardly any wind and the temperatures were from 22-27℃. We lowered the dinghy and explored the area. As I waded to shore, I came across many mussel beds, so the idea of eating mussels that evening came to me. Armed with a bucket in my dinghy, I picked 5 kilos of mussels and cleaned them. That evening, we ate a joint meal of mussels.

The next day, Cees gave me a demonstration with his drone, taking off and landing from the front deck of his boat. A new learning experience for me with beautiful images. See also Youtube movie 2022-8 (or via menu button YouTube)

On this date it was time to weigh anchor at 08.45 for the route to Middelfart. Cees and I had agreed to go together as much as possible and to stay near each other for photos and video of our sailing ships. Their destination was now Middelfart, but I was in doubt and wanted to make a stop at anchor halfway. We took a lot of photos and films of each other and later exchanged them. It was another beautiful day of sailing. Halfway through the route I found a nice bay where I wanted to anchor, so there our paths parted again. They would also go into a bay to anchor off Middelfart later that day.

As mentioned in the previous paragraphs, I sailed into the bay at Assens(dk), a bay on the Toro peninsula that is well sheltered from many directions of wind. There were also mooring buoys there, one of which was still free.

Because I had decided to go to Middelfart after all, I detached from the mooring buoy at 09.30. I saw on the AIS that Sam and Cees had also dropped anchor for the last stretch to Middelfart. I had good memories of my previous visit to the old town harbour of Middelfart. On 9-8-2013 that was during my Round Denmark (another pdf story). At 14.30 I sail into the old town harbour where Sam and Cees are moored in the corner. So I turned the boat around in the harbour entrance, to go backwards and moor alongside the Ellya.
It was as if I had not been away in Middelfart. Of course, I saw the modernisation, especially on the harbour front, but the main street with its authentic buildings was untouched. After spending two nights in the harbour for € 57.76 (my only harbour fee so far on the Baltic Sea, I am on a budget tour after all) the moment came that Sam and Cees were now going further north and our paths would be permanently separated. I enjoyed their presence and the beautiful images we could make of each other while sailing. Thanks Sam and Cees! Will meet again, somewhere, somehow.

Here in Middelfart, my outward journey ends for 2022 and the return journey begins, this time along the Danish and later German East coast. You can read all about it in my next blog. 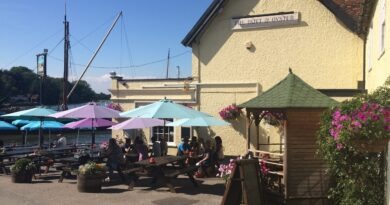 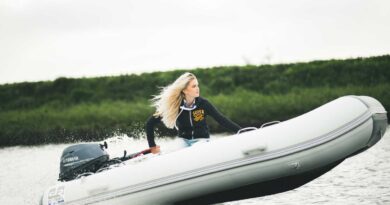 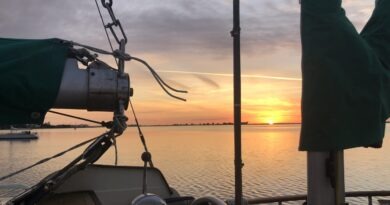 Summer voyage Baltic 2021 Part 5 – The round trip to Svendborg, dk